born in 1971, was born in the Rhineland and is a trained theatre director.

His first engagements after studying, directing took him from Schauspiel Köln via Münchner Kammerspiele to Deutsches Schauspielhaus Hamburg, where, among other things, he directed contemporary drama in Andreas Beck's authors-in-residency project, developed plays as a dramaturge with Ingrid Lausund and opened up the idea of the Junges Schauspielhaus with his first works such as "Der Junge im Bus".

From 2002 to 2010 he worked as a freelance director in German-speaking countries and in Switzerland and Italy. In 2009 he graduates in parallel in the Executive Master in Arts Administration programme at the University of Zurich and enters his first job in the management of theatres as a communication expert at the Thalia Theatre in Hamburg.

As of 2017, Jochen Strauch is working as a director again. His remits are diverse and cross-disciplinary: from classics such as "Nathan der Weise" or "Hamlet", contemporaries such as Ayad Akhtar or Lot Vekemans to children's and youth theatre and musical productions, e.g. the EU premiere production of David T. Little's "Soldier Songs", at state theatres, regional theatres and municipal theatres in German-speaking countries.

During the COVID 19 pandemic, two of his works have been transferred to digital space, the audio play with digital production book "Raus aus dem Swimmingpool, rein in mein Haifischbecken" at the Staatstheater Darmstadt and the theatre film "Niemand wartet auf Dich" at the Schauspielhaus Graz – a German-language premiere that will also bring political level and art into direct contact in town halls in Styria from November 2021.

The first works for GRIPS, "Dschabber" (Awarded the IKARUS 2019) and "#diewelle2020", which he wrote, were made pandemic-proof with COVID-19 updates.

"Pulling the Plug" is the first work after the lockdowns under new regulations that reapproaches the old proximity-distance sensibility based on complex safety precautions. On his website, he provides insight into the creation processes of some of the works in making-of blogs. 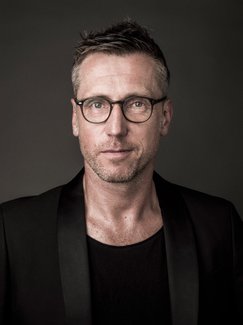