Öz Kaveller was born in Istanbul, Turkey. She went to school there and studied opera choir and clarinet at the State Conservatory of Mimar Sinan University directly after her high school graduation from 1985 to 1992.

She also participated in workshops as a studio theater actress in Kadiköy Adult Education Center from 1988 to 1992. From 1996 to 2000 she trained in jazz dance at a private dance school in Istanbul.
From 1992, Öz has worked in Istanbul as a vocal and piano teacher, as a dubbing artist, studio accompanist and as a composer, musician and actress (for theater music, a short film, TV series and music for TV commercials). She also produced two music albums of her own.
Later, in Berlin, she founded the vocalist group "Akapella Trio"/ "TransAlpin" and works as a radio announcer and editor for RadioMultikulti. She is a freelance soloist for Carlo Domeniconi and offers courses and workshops in breathing techniques, choir and singing.
She also works as a composer and musician at various theaters: GRIPS Theater and Theater Aufbau Kreuzberg (tak) in Berlin, Deutsches SchauSpielHaus Hamburg, Düsseldorfer Schauspielhaus, International Theater Frankfurt, Fabrika Sanat Theater and Arama Theater in Istanbul, and Metamorfoz sanat evi in Datça, in Turkey. 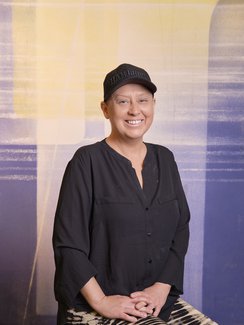