Bettina Koch was born in 1957 in Minden/Westphalia. After school she graduated from the Detmold Music Academy (Rhythm) and the Berlin University of Arts (HdK): Theory & Composition & Ear Training (Prof. Kühn and Prof. Fladt) and takes private lessons: Singing (Markus Haas, Kara Jonstadt) and Voice Training (Hanny Herter).
Since 1987 she has been working as a musical director, pianist or actress/singer without breaks. She works at the Renaissance Theater, Berliner Ensemble (with Peter Palitzsch's "Pericles" and "Baal"), Theater am Halleschen Ufer and BKA with the women's cabaret "5-Appeal" as her own production. She also works as a pianist and cabaret artist at the Kabarett Obelisk, Potsdam, then at the Thalia Theater in Halle/Saale (premiere of a children's opera and a hip-hop musical) and as a pianist with the dance company Rubato, Berlin. Her own productions are "Kellnerinnen" and "Chorprobe" at the Bar jeder Vernunft.
At the Stadttheater Moers she works for "Leonce und Lena", followed by various productions for the Neuköllner Oper (with Thomas Zaufke, Wolfgang Böhmer, Niklas Ramdohr and others). In Switzerland she is active at the Stadttheater St. Gallen 2000|2001 and at the Grenzlandtheater Aachen 2001|2002 with "My Fair Lady" and stage music for "Don Carlos", at the Staatstheater Braunschweig 2003|2004 with "Das Kontingent". In addition, she performed a song recital at the Städtische Bühnen Bielefeld from 2012 to 2015. In addition, from 2015 to 2020 she is always on the road for the touring theater Landgraf with "Chorprobe" and "Heiße Zeiten".
As a guest lecturer, she regularly teaches at the Ernst Busch Academy of Dramatic Arts and currently since 2016 at the Berlin University of the Arts, Department of Acting.

Since 2015, she has worked on and off as musical director or musician at the "Neues Globe Theater" Potsdam, most recently rehearsing the premiere of "Der tollste Tag oder Figaros Hochzeit" (The Greatest Day or Figaro's Wedding) by Peter Turrini after Beaumarchais (premiere on August 1, 2020, open air at the Schirrhofnächte in Potsdam).

And most importantly, she has been a permanent member of the GRIPS Theater since 2001 as a musician, singer, actress, music, voice and group teacher, arranger and much more. 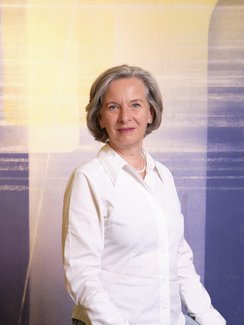