Robert Neumann was born in Berlin in 1963. He has been taking piano lessons since the age of six, followed by music studies at the Berlin University of the Arts from 1981 to 1984.
Regular theatre work has taken place since 1983, including at the Reineke-Fuchs-Theater Berlin and Theater des Westens Berlin, the Schauspielhaus Hamburg and the Schleswig-Holsteinisches Landestheater. Robert has been on the road since 1989 as a musician, composer and arranger with various cabaret and comedy programs throughout Germany (e.g. "Hartmann und Braun", since 1994 mainly with "Thomas Nicolai"). Musical work includes "Caledon – the Scottish Tenors" and a "Cats" tour production.
Other fields of activity are the production of CDs (together with Thomas Nicolai, Rainer Bielfeldt and the "fabelhaften Millibillies"), composition and production of radio plays ("Die Märchenmäuse", "Käpt'n Sharky") , composition and arrangement for film and television (feature film "Ins Blaue"/directed by Rudolf Thomé/2012, regularly for "Kalkofes Mattscheibe") and composing school musicals ("Hello Halloween", musical by Claudia Balko and Wendy Kamp/2013, "Eine ganz normale Klasse" by Thomas Ahrens/2019, "Das wilde Pack" by Boris Pfeiffer and André Marx, world premiere 2018 in Shanghai).

Robert has been engaged as a musician in various plays at GRIPS Theater since 1986. 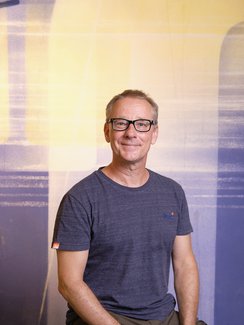