Michaela Hanser was born in Freiburg and studied acting at the University of Music, Drama and Media in Hanover.

She received her first engagement at the Staatstheater there. To date she has performed as a guest at numerous theatres in German-speaking countries, including: Schlossparktheater Berlin, Theater am Kürfürstendamm in Berlin, Tourneetheater Landgraf, Sommerspiele Rothenburg o. d. Tauber, Comödie Dresden, Musikalische Komödie Leipzig, Thalia Theater Halle, Stadttheater St. Gallen, Kammertheater Karlsruhe, and many more.

In 1986 she was the first actress to dramatise and perform a solo play based on the famous novel "Das Kunstseidene Mädchen" by Irmgard Keun (also performed at GRIPS Theater).

From 1987 to 1991 and from 1996 to 2009 Michaela is a permanent ensemble member at GRIPS Theater, where she can be seen in numerous roles. Of course, in the long-running hit "Linie 1" (still occasionally), some 800 times as "Lady" and in many other roles, she is also part of the world tour.

Most recently she can be seen as Berta in "Pünktchen trifft Anton" at GRIPS Theater.

In addition to her acting work, Michaela also directs scenic and choreographic recasting rehearsals for "Linie 1" and is still responsible for the revival rehearsals of "Ab heute heißt du Sara". She remains loyal to GRIPS, even though she took her leave as a permanent ensemble member in 2009.

She also works as a voice-over artist for various radio plays and voice-overs.

In between her acting engagements, she has turned a beloved hobby into a diversified side job: she leads hiking tours, mainly in Europe, for a renowned travel company. 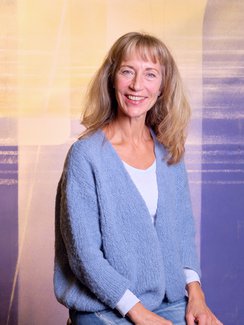