Marcel Herrnsdorf was born in Mainz in 1994.

During his school days he became a member of the ensemble in the Youth State Musical at the Hessen State Theatre Wiesbaden in 2010, where he appeared in many different musical productions over the next five years (Director: Iris Limbarth) over the next five years. In 2014 he played the leading role of “Donald Delpe” in the musical world premiere “Superhero”, which was nominated in two categories for the German Musical Prize. He is also a guest actor at the Wiesbaden State Theatre in the productions “Der Junge in der Tür” (Role: Rafa Junior, Director: Julia Wissert; awarded the Kurt Hübner Director’s Prize) and “Hamlet, Prince of Denmark” (Role: Cornelius, Director: Nicolas Brieger).

In 2015 Marcel started his studies at the renowned Otto Falckenberg School in Munich. During this time he performed the productions “Einige Nachrichten an das All” (Director: Christiane Pohle) and “Zeit zu lieben Zeit zu sterben” (Director: Robert Lehniger). The latter was awarded the ensemble promotion prize at the drama school meeting 2018 in Graz.

In 2016 he was a guest at La Scala in Milan in the production “The magic flute” (Director: Peter Stein), which was on tour in Shanghai in autumn 2019. In addition to the stage, Marcel also works in film and television productions, for example in the ARD feature film “Kaltfront” (Director: Lars Henning), in the ZDF film “Frühling – Spuren der Vergangenheit” (Director: Gunnar Fuss) or in the short film “Die letzten Kinder im Paradies” (Director: Anna Roller).

Marcel Herrnsdorf will start his first permanent engagement at GRIPS Theater in the 2020/2021 season. 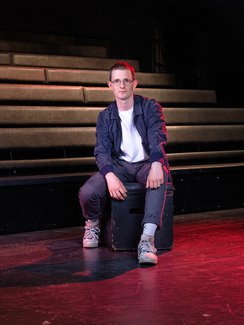