Katja Hiller was born and grew up in Berlin (West).

Katja made her theatrical debut in 1980 at the Schillertheater as a neckless monster in "Cat on a Hot Tin Roof”. This made her career choice clear.

After graduating from secondary school, she completed her acting studies at the Bavarian Theatre Academy in Munich in 1999. In 1998, at the drama school meeting, Katja won the ensemble award for her class and the production of “Das Kaffeehaus”.

Her first engagement at GRIPS Theater was from 1999-2001. She then worked as a freelance actress for nine years and played on various stages, including at the Akademietheater in Munich, Theater Oberhausen, Schauspiel Essen, Tribüne Berlin, and at the Schauspielhaus in Zurich.

Katja has been a permanent member of GRIPS Theater ensemble since the 2010/2011 season. In 2017 her wish for a solo evening came true and she is still performing “Das Heimatkleid” in Podewil.

Katja can also currently be seen in a small role in “Babylon Berlin” and also works as a voiceover actress. 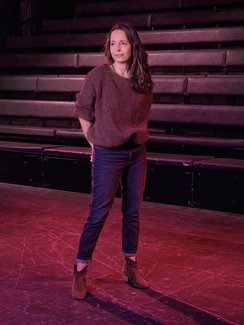