Helena Charlotte Sigal was born in Saarbrücken in 1996.

During her school days, she acted in the youth club of the Saarland State Theatre and assisted in various areas of the theatre. In “Das Geld” (Directed by: Dagmar Schlingmann) she could be seen on the big stage for the first time and also travelled with the play to the Ruhr Festival in Recklinghausen and to Thionville, France.

After graduating from high school, Helena studied drama at the MUK – Music and Art Private University of the City of Vienna from 2016 to 2020. She spent her semester break two years in a row at the TheaterNatur Festival in the Upper Harz and appeared in the productions “Hexenjagd” (Directed by: Janek Liebetruth, Roll: Mary Warren) and “Frühlings Erwachen” (Directed by: Catharina May, Rolls: Ilse, Masked gentleman.

During a semester abroad at the Academy of Arts in Osijek, Croatia, Helena studied acting as well as puppetry.

In 2019 she played Jess in the premiere of “A Long Way Down” by Nick Hornby (Directed by: Christian Nickel) at the Bad Hersfeld Festival.

She made her first appearances in film and television on “SOKO Kitzbühel” (ORF, ZDF) and “Schnell Ermittelt” (ORF).

With the 2020|2021 season, Helena began her first permanent engagement at GRIPS Theater. 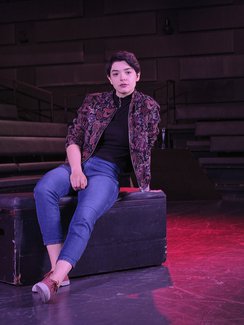