Esther Agricola was born in Trier in 1989. She began acting on the big stage at the Trier Theatre while still at school (from 2004 to 2008 in "Des Teufels General", "König Ödipus", directed by Horst Ruprecht) and soon decided to make acting her profession.

From 2009 to 2013 she studied acting at the renowned Hochschule für Schauspielkunst "Ernst Busch" in Berlin and during this time already performed at the Schaubühne Berlin ("Katzelmacher", directed by Ivan Panteleev) and at the Berliner Arbeiter-Theater (bat-Studiotheater of the Hochschule für Schauspielkunst "Ernst Busch") ("Kasimir und Karoline", directed by Korbinian Schmidt).

In 2014 she began acting for the first time at GRIPS Theatre, initially as a guest, then from 2015 as a permanent ensemble member (including "Frau Müller muss weg", "Linie 1", "Inside IS", "Kriegerin").
Since 2018, when Esther left the permanent engagement, she has performed at various theatres (Komödie am Kurfürstendamm, ATZE Musiktheater) and in various television productions (including "Rampensau", "Mississippi", "SOKO Leipzig"). Nevertheless, she remains loyal to the GRIPS Theatre as a guest and can be seen regularly in various plays. 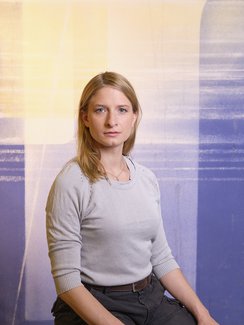