Dietrich Lehmann spent his first school years in Saxony-Anhalt (GDR), followed by a period of youth and boarding school in North Rhine-Westphalia (FRG), where he graduated in 1959. In 1960 he began studying theatre, German, sociology and art history at the Free University of Berlin and became a member (later director) of the student cabaret "Die 7 Schaben".

In addition to his studies, he took acting lessons in evening classes at the Kirchhoff acting school ("Der Kreis") from 1961 to 1964 and passed the stage maturity examination before the Paritätische Prüfungskommission in 1965.

In 1967 he exmatriculates from the FU, but continues to work on a dissertation, attends the doctoral colloquium and takes up a teaching position for theatre history, scene work and improvisation at the Fritz Kirchhoff School. In 1981 he takes over the direction of the school and works as a lecturer for theatre history.

In 1969 he begins his engagement as an actor in the "Theater für Kinder im Reichskabarett" in Berlin-Wilmersdorf, and in 1972 he becomes a member of the ensemble that puts on the first GRIPS production, "Mannomann". Since then he has worked at GRIPS Theater as an actor, director and assistant dramaturg, in addition to being a member of the cast committee from 1978 to 2009, a member of the works council on several occasions and, since 1976, chairman of the local GRIPS Theater association of the GDBA (Genossenschaft Deutscher Bühnenangehöriger), currently deputy chairman and, for the past seven years, regional chairman of the Berlin/Brandenburg regional association of the GDBA.

In addition to almost 6,000 performances at GRIPS Theater, he can be seen in various television productions and radio plays. 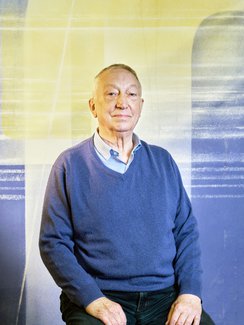