Claudia Balko was born in West Berlin a year after the Wall was built and grew up around the corner from GRIPS Theater on Hansaplatz. She already got a taste of theatre in primary and secondary school.

In 1984 she studied acting at the Hochschule der Künste (now the Universität der Künste) in Berlin.

Even before and during her studies, Claudia appeared in various musical theatre productions on small Berlin private theatre stages and plays a leading role in the series "Die Vier aus der Zwischenzeit" within the cult Berlin magazine "45 Fieber".

In 1986 she auditions at GRIPS Theater for the role of Milli in the play "Max und Milli" and receives a guest contract. One year later, she is accepted into the permanent ensemble and goes on a world tour with "Linie 1", including New York, Melbourne, Jerusalem, Copenhagen and Moscow. At GRIPS she appeared in "Ab heute heißt du Sara", "Auf der Mauer auf der Lauer", "Eine linke Geschichte", "Aber bitte mit Sahne", "Freiheit und Abenteuer", "Kloß im Hals", "Haben Sie ein I?", "Heimatlos" and many other productions.

In 1993 Claudia leaves GRIPS Theater for the time being to look around in other Berlin theatres. She plays at the Tribüne, the Theater am Kurfürstendamm, the UFA-Fabrik, Theater Strahl and ATZE Musiktheater. She also shoots for various television productions, including the Berlin "Tatort" (as the assistant to Inspector Markowitz, played by Günter Lamprecht).

Since 1999 Claudia has returned to GRIPS Theater again and again for guest contracts.

Among others, she performed in the two-person play "Flimmer Billy" from 2006 until spring 2020, which has also been invited to Korea and India in English.

In addition to her acting work, she has been developing, directing and writing music theatre projects for schools and other institutions since 2010. 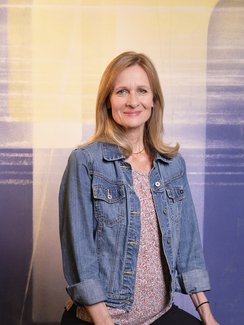