Ariane Fischer was born in 1976 in Berlin, at the shorter end of the Sonnenallee. From playing ball at the Berlin Wall, she goes to Berlin's Friedrichstadtpalast as a solo dancer and actress for many children's revues and musicals for ten years as early as 1985, in addition to her schooling.

From 1996 to 2000 Ariane studied "Musical/Show" at the Berlin University of the Arts under Stanley Walden and Peter Kock and graduated "with distinction".

Her path leads her via the BAT Studiotheater ("Lysistrate") and the Neuköllner Oper Berlin (Susan Smith in "How to succeed in Business ...", directed by Peter Lund) to the big musical stage for "Falco meets Amadeus" at the Theater des Westens. There she takes on various roles, including "Jeanny" and other covers until spring 2001.

In 2004, love drew her to Düsseldorf. In addition to various roles in film and TV, she spent the following years performing on various stages in the Rhineland. Her path leads her from the Dortmund Theatre via the Ringlokschuppen in Mülheim an der Ruhr and the Oberhausen Theatre to the Cologne Schauspiel ("Europa für Anfänger", directed by Erik Gedeon).

From 2008 Ariane worked at Dortmund's Hansa Theater Hörde in a wide variety of productions as a musical performer and choreographer. In 2011 she moved back to Berlin from Düsseldorf with her family, which now consists of two children, a husband and a cat, and has since worked continuously as a permanent guest performer at GRIPS Theater. 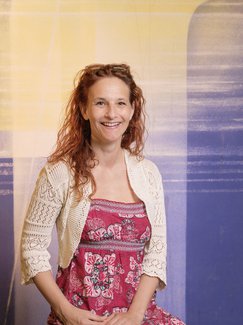