Alina Vimbai Strähler was born and grew up in Duisburg.

She completed her acting training at the Zurich University of the Arts, graduating with a Master of Arts in 2015.
As part of her training, she is a scholarship holder of Building Bridges, an exchange project of New York University/NYU Tisch School of the Arts with work stays in New York and Florence.

She is also a scholarship holder of the Zürcher Theaterverein, the Max Hausmann Foundation and the Datio Foundation.
During her studies, Alina already played at the Schauspielhaus Zurich in "Zoo der Zeitgenossen" (director: Antje Schupp), as well as at the Schauspielhaus Frankfurt in "Der Zeuge" (director: Leonie Kubigsteltig) and in various productions at the Theater der Künste Zurich.

After graduating, she went on to her first engagement at the Theater Konstanz where she played the title roles in "Miss Sara Sampson" (director: Alexander Marusch), in "Judith" (director: Thoko Kapiri) and in "Die kleine Hexe" (director: Sascha Bunge), among others.

In 2017, Alina moved to the Lucerne Theatre, where she worked with the directors Alexander Giesche, Julia Wissert, Nina Mattenklotz, Niklaus Helbing, Bruno Cathomas, Bram Jansen and Anja Behrens, among others.

With the production "White Out", an invitation to the Swiss Theatertreffen followed in 2018.

In 2019, Alina went to Paris for half a year and then moved to Berlin.

She was part of the GRIPS Theater ensemble since the 2019|20 season. She has been an ensemble member of the Schaubühne since 2021. 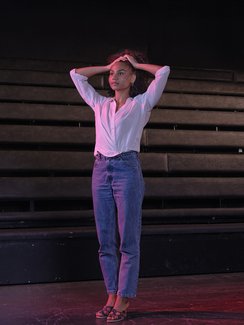