Wiebke Hagemeier studied social sciences, German studies, socio-cultural studies and social work in Bielefeld, Frankfurt (Oder) and Berlin. She took her first theatrical steps with and under the mask during her studies and during a volunteer year in Peru.

As part of suite42, she works on productions and festivals at Heimathafen Neukölln, Schaubühne and at festivals in Germany and Palestine. She directs as a freelance theatre pedagogue in Berlin and Zurich. In addition to her staging work, she is very interested in artistic encounter formats and forms of institutional audience participation. In 2015, for example, she conceived, directed and moderated the KinderTheaterParlament and has since been in charge of all holiday conferences and advisory board formats at the GRIPS Theatre.

She has been working at the GRIPS Theatre since 2016. In the 2020|21 season she will be leading the youth club "Die Forscher*innen" together with Alexander Kuen, whose interactive theatrical play HARTE ARBEIT has won several awards. 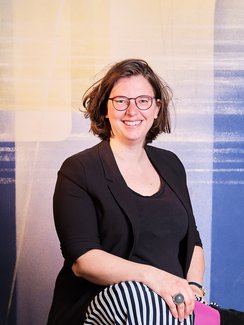