Thomas Keller was born in West Berlin in 1964. After graduating from the Albrecht-Dürer-Gymnasium, he studied saxophone and composition at the University of the Arts in Berlin.

He is touring with George Kranz and the no-1 hit “DinDaaDaa”, having previously performed in many Berlin clubs and having recorded the first LP record with Irish pop singer Kiev Connolly (-Ariola-).

In 1986 he came to GRIPS Theater with the start of “Linie 1”, where he has been employed to this day.

In addition to studio work (including for the Hansa-Studios Berlin, Alphaville, Klaus Schulze, Romy Haag) and tours as a saxophonist with Ulla Meinecke, the chansonnier Tim Fischer and currently with Axel Prahl, he has composed around 30 stage music pieces, many of them for GRIPS Theater.

In 2014 he took up the position of “Development of the Music Department” at GRIPS, which from 2018 lead to the “Music dramaturgy” position.

There he has built up, among other things the label “grips-records” for GRIPS and looks after all musical aspects and areas related with the theatre. 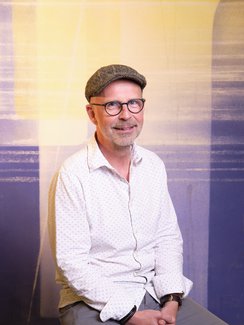