Philipp Harpain, theatre pedagogue, project developer and director, has been artistic director since 2016 and head of GRIPS Theater since 2017. Before that, he successfully headed the theatre education department of GRIPS Theater for 14 years, which he built up and expanded into one of the largest and most prominent in Germany.

Philipp Harpain was born in Kiel in 1966 and grew up on the edge of the Teufelsmoor. As a teenager he devoted himself to political street music and theatre. After his training as a theatre pedagogue in Ulm, he worked as an actor and theatre pedagogue at the Landestheater Neustrelitz, in the Moks-Theater Bremen and Carrousel-Theater an der Parkaue as well as a director in the independent scene, before moving to GRIPS in 2003.

He is an expert in play development, research projects, children’s and human rights, participatory formats and campaign theatre. This work has always been characterised by networking and cooperation – with schools, numerous NGOs and other partners. As a director, he conducts research at the interface between theatre and circus as well as interactive forms in children’s and youth theatre.

With the founding of the GRIPS own music label and the GRIPS Foundation, Philipp Harpain is making the theatre up-to-date and future-proof.

He runs GRIPS Theater in the tradition of a radically realistic contemporary theatre that depicts the audience’s world of life and thoughts. They are implemented with all artistic means and political expressiveness. With keen eyes he searches for new materials in Berlin that are close to the audience. In the process, he develops ideas and exciting forms for the stage in direct contact with the children and young people, as well as with the house itself. His targeted support for authors and projects as well as the development of numerous world premieres by his ensemble under remarkable directors not only keep the programme of GRIPS Theater up to date, but also make GRIPS an inspiring, internationally networked place for children and youth theatre with an enthusiastic audience of all ages. 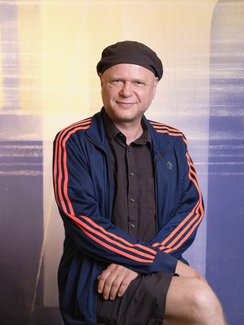