Patrik Cieslik was born in Heinsberg, North Rhine-Westphalia, in 1989. His first major contact with the stage came in 2009 when he took part in the "Jugend musiziert" competition, where he was awarded 1st prize at national level.

From 2010 he studied at the Berlin University of the Arts and performed at the Neuköllner Opera during his studies, including in the production "Stimmen im Kopf" (director: Peter Lund).

In 2014 he made guest appearances at the Freilichtspiele Schwäbisch Hall in "Kiss me Kate" (director: Christoph Biermeier) and at the Kammertheater Karlsruhe in the musical revue "Männer" (director: Michael Letmathe).

In the following years Patrik plays leading roles at the Wintergarten Varieté Berlin in "Peter Pan" and "Aladdin", in John von Düffel's play "Sieben Sonette" at the Grenzlandtheater Aachen (director: Philip Steman), in the musical "Sarg niemals nie" at the Bar jeder Vernunft in Berlin (directors: Dominik Wagner and Jörn-Felix Alt) and is on stage in "Sugar – Manche mögen's heiß" (director: Johannes Weigand) as Jerry/Daphne at the Anhaltisches Theater Dessau.

He is a permanent ensemble member at GRIPS Theatre from 2016 to 2020 and continues to appear as a guest actor at GRIPS thereafter, including in the play "Dschabber" (director: Jochen Strauch), which was awarded the IKARUS Children's and Young People's Theatre Prize in 2019.

In addition to his work on stage, Patrik is also artistically active as a speaker, dubbing actor and singer. 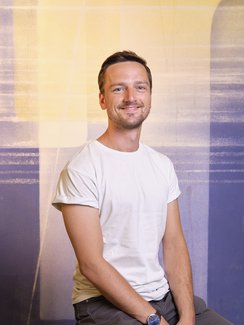