Nina Reithmeier was born in Kempten (Allgäu) in 1981.
During her school years, she appeared on stage as the first boy in "The Magic Flute" and took part in "Jugend musiziert" singing competitions, where she won first prizes.

After a year abroad in the USA and her Abitur in 2001, Nina went to Munich, did various internships in film and TV and began to study communications. She gave up her studies after two semesters for a role offer in television. She played the lead role in a ProSieben series for three seasons and 250 episodes, then turns her back on Munich and goes to Berlin to study at the Schauspielschule Charlottenburg.

In summer 2008, Nina graduated with a diploma in acting. During this time she sings the lead role of Saffi in "Zigeunerbaron", has a son and continues filming for television.
An engagement at the Neuköllner Opera ("Turkish for Lovers") followed and in 2009 a permanent contract at GRIPS Theater. Award-winning productions include "Frau Müller muss weg" (Monika Bleibtreu Prize 2012, directed by Sönke Wortmann), "Über Jungs" (including DER FAUST 2013, Mühlheim Youth Play Prize, directed by Mina Salehpour), and "Dschabber" (including IKARUS 2019, directed by Jochen Strauch).

In 2013, the city magazine Zitty found Nina to be "one of the 10 most exciting young actresses in Berlin". In addition to her work for GRIPS Theater, Nina works as a narrator for audio books and radio plays, shoots for film and TV and volunteers for refugees. 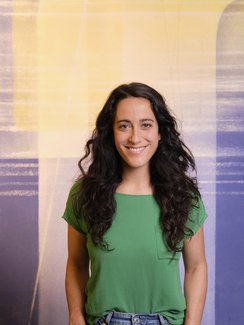