Ludwig Brix was born in Düsseldorf in 1995.

During his school days he was part of the Grefrath Youth Theatre, where he could be seen in various musical productions from 2012-2014.
During the school year abroad in Nebraska, he was voted “outstanding actor” twice.

In 2015 Ludwig started his studies at the Anton Bruckner University Linz. With the movement play development “top dogs” (Director: Aleksandar Acev) he and his class won the Dionysus Festival in Osijek, Croatia in 2016. During his studies he was employed as a studio member at the Linz State Theatre. He could be seen in the following plays and roles: In “Peter Pan” as Peter Pan (Director: Martin Philipp), at the Schäxpir Festival in “Aufzeichnungen eines Querulanten” as Josef S. (Director: Julia Burger) and in the Austrian premiere of “Auerhaus” as Höppner (Director: Charlotte Sprenger).

In April 2019 Ludwig started his first engagement at GRIPS Theater. 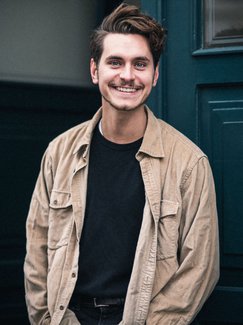