Lisa Klabunde was born in Leipzig in 1990.

At the age of 13 she joined a youth theatre group of the Theatrium Leipzig e.V. and enjoyed the experience of thinking about the world in a group.

After graduating from secondary school, she studied social work. Unfortunately, Lisa did not survive the long lectures in administrative law, after two semesters she could not keep her feet still and applied to the Theatre Academy in Western Pomerania, where she studied acting from 2010-2014. During her studies she could already be seen as Juliet in “Romeo & Juliet” at the Theater Neubrandenburg/Neustrelitz.

Her first engagement took her to the Rudolstadt Theatre from 2014-2017. Her favourite roles there were Gretchen in “Faust I” (Director: Steffen Mensching), Hermia in “A Midsummer Night’s Dream” (Director: Jens Schmidl), Nadeshda in “Eine heikle Sache, die Seele” (Director: Herbert Olschok) and Vicky/Brooke in “Der nackte Wahnsinn” (Director: Carl-Hermann Risse). For the 2016 season she received the “Caroline” theatre award from the Rudolstadt Theatre for her “outstanding acting performance”.

In the season 17/18 Lisa moved through the theatre landscape as a freelance actress, playing Maria Stuart in “Maria Stuart” (Director: Marcus Kaloff) in a free production in Magdeburg, she was also active as a guest at the Rudolstadt Theatre and the German-Sorbian Volkstheater in Bautzen.

In the spring of 2018, Lisa was accepted into the ensemble of GRIPS Theater and has felt very much at home here ever since. 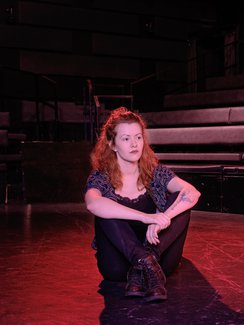