received her training in acting, singing and dance at the Hochschule der Künste/Berlin.

This was followed by engagements in a wide variety of musical and acting productions at various theatres, e.g.:

In recent years Laura has performed in the musical comedies:

Heisse Zeiten and Höchste Zeit at the St. Pauli Theater HH the role of "Vornehmen" and at the Theater des Westens in the musical "The Band", Heather – one of the female leads.

This role belongs, as well as Eliza in "My fair Lady" and Linda in "Spiel's nochmal, Sam" to her personal, professional highlights.

Not to forget, of course, Maria in "Linie 1" at GRIPS Theater, where she also appeared as an ensemble member in numerous other productions from 2002-2007.

To this day, she can still be seen here as a regular guest in "Linie 1" as Bulettentrude, among others. 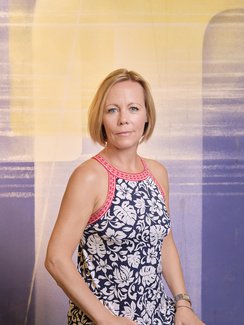