Florens Schmidt was born in 1984 in Berlin.

From 2006 to 2010 he studied at the Konrad Wolf Academy of Film and Television in Potsdam-Babelsberg. During his studies he worked with directors Andreas Kleinert, Lukas Langhoff and Tim Tonndorf ("Prinzip Gonzo"), among others, and already had a guest engagement at the Hans Otto Theater Potsdam during this time. In 2009 he plays Frankie in "Lügengespinst". The production receives the ensemble prize at the Schauspielschultreffen in Zurich.

From 2011 until the end of the 2015|2016 season, Florens is part of the ensemble of the Junges Schauspielhaus Hamburg, where he can be seen in "Verbrennungen" (role: Nihad, director: Konradin Kunze) and "Die Gerechten" (role: Kaljajew, director: Alexander Riemenschneider), among others. He also plays in the play "Alice in Wonderland" (director: Barbara Bürk), which was awarded the theatre prize DER FAUST in the category "Best Direction Children's and Youth Theatre" in 2012. As a guest Florens can be seen as Christopher Boone in Klaus Schumacher's production "Supergute Tage" from 2014 to 2020.
Since 2016 he has been touring freely, e.g. at Ballhaus Ost-Berlin and Kudamm-Karree in the production "Monypolo 2" (directed by "Prinzip Gonzo"). Since 2018, Florens has been engaged as a guest at GRIPS Theater in the play "Linie 1", where he embodies the role of Schlucki, among others. In 2019 he will take on the role of Joachim Meyerhoff in "Ach, diese Lücke, diese entsetzliche Lücke ..." at the Altonaer Theater in Hamburg.

In addition to his theatre work, Florens can also be seen in a number of film and television productions. He plays one of the main roles in the feature film "Krankheit der Jugend" (directed by Dieter Berner) and takes on a role in Andreas Kleinert's film "Brasch" (2019). He also works regularly as a narrator for "Dlf", "Der Hörverlag" and "Buchfunk Verlag". 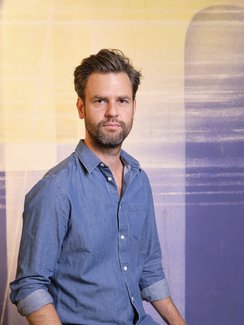