Asad Schwarz was born in East Berlin in 1963, attended the Polytechnische Oberschule, did an apprenticeship as a cook, became a soldier in the National People's Army and studied at the Ernst Busch Academy of Dramatic Art.

Asad experienced the fall of the Wall at the Landestheater Parchim, where he worked with Uwe Dag-Berlin and Leander Haußmann, among others, until 1992. He then made guest appearances in Erfurt and Berlin (under the direction of Annett Wöhlert and Eckehard Emig), in Bruchsal (under the direction of Marcus Lachmann and Daniel Call) and in Rostock (under the direction of Christina Emig-Könning) until 1996, when he moved permanently to the Staatsschauspiel Hannover with Andreas Kriegenburg. There he also works with Ulrich Khuon, Michael Börgerding, Michael Talke, Tilman Gersch and Mark zur Mühle.

In 2000 Asad moved with Ulrich Khuon to the Thalia Theater Hamburg, where he remained until the 2009|2010 season, working with Jürgen Kruse, Krystian Lupa, Stephan Kimmig, Stefan Moskow, Alice Zandwijk, David Bösch, Frank Abt, Corinna Sommerhäuser, Christiane Pohle, Dimiter Gotscheff, Jorinde Dröse and Jette Steckel, among others, and continuing to work with Andreas Kriegenburg.

Since 2009|2010 he has been a guest of the Deutsches Theater Berlin, the English Theatre Berlin, the Theater Oberhausen, the Staatstheater Cottbus, the Ballhaus Naunynstraße and the Bühne für Menschenrechte.

At GRIPS Theater, Asad can be seen for the first time in 2016 in the production "Inside IS". He has also been seen and heard in numerous film and television productions since 1986.

He is the father of two daughters and lives and works mainly in Berlin. 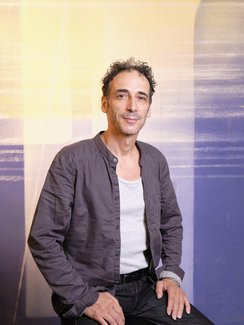