Nina Schwartz, born in Biberach a. d. Riss, accompanied a children's choir on stage at the age of six. As a multiple national prize winner at "Jugend musiziert", she began her studies at the State University of Music and Performing Arts (HMDK) Stuttgart (with Prof. André Marchand) at the age of 16.

After graduating from high school, she studied piano at the Rostock University of Music and Theatre (with Prof. Matthias Kirschnereit). During her music studies she became increasingly interested in acting and initiated interdisciplinary projects together with fellow students.

In 2008, as an actress in duo with the pianist Lidia Kalendareva, she wins the 1st prize at the International Melodrama Competition in Prague. At the same time she can be seen as a pianist and protagonist in the short film "Aus der Seele" (directed by Holger Löwe), which is shown at the Solomon R. Guggenheim Foundation New York in 2010.

Nina completes her acting studies, which she graduates in 2014, at the European Theater Institute Berlin.

Several engagements follow, including 2013 at the GREC Festival in Barcelona in the production "Außergewöhnliche Jugendliche" (directed by Glòria Balañà Altimira), 2016 at the Neukölln Opera "Tosca G8." (premiere, director: Michael Höppner), 2017 at the 3rd Berlin Autumn Salon of the Maxim Gorki Theater with the performance "Feldlager Babel-Stadt" (Nina Ender/Stefan Kolosko). Most recently, she starred in the comedy "Schwarzwaldmädel" (directed by Peter Kratz) at the Ludwigsburger Theatersommer.

Since 2018 Nina plays as a guest at GRIPS Theater. 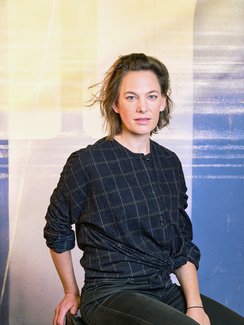