René Schubert was born in Halle (Saale), in what was then the GDR in 1966.

The decision to become an actor was already made during secondary school. All attempts to gain access to a State drama school failed because of his attitude, which was not very conformist. After 18 months of military service, most of which he spent in “punitive units”, René began studying German and English at the Martin Luther University in Halle. After two semesters, he decided to “become an actor, no matter how”.

In 1989 he worked as a porter and as a playing technician at the Thalia Theater in Halle. At the same time, he renewed applications at the three State schools. At the Konrad Wolf Film Academy in Potsdam, he was due to begin his studies in the autumn of 1990, but René was rejected despite having passed the exam. He went to Potsdam, “occupied” the Rector’s office and demanded admission.

The wall had come down and his studies began.
After guest contracts at the Berliner Ensemble and the Renaissance Theatre, René became a member of GRIPS Theater in 1994. He plays the role of Lucky in R. Wandel’s production “Eins auf die Fresse”, which won the 1996 Friedrich Luft Prize. Various roles followed in the years up to 1998.

A guest engagement lead René via Athens to New York to the “Majestic Theatre” in Brooklyn. After freelance projects at various Berlin theatres (from Tacheles to BKA to Bar jeder Vernunft) and various roles in film and TV, René went to Düsseldorf in 2003 with the former GRIPS dramaturge, Stefan Fischer-Fels. There he worked at the Junge Schauspielhaus as an actor and director, and as an actor at the theatre.

René teaches opera singing students in acting at the Robert Schumann University. After 8 years, a love with 2 children and countless productions in Düsseldorf, the request came to come back to GRIPS Theater in Berlin. René moved to Berlin with his family.
Since 2011 René has been a member of the ensemble at GRIPS Theater again. 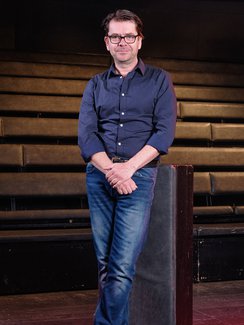