Regine Seidler was born on 6.3.1970 in Leipzig; grew up in East Berlin, where she graduated from secondary school in 1988.

She worked as a nurse in order to study medicine, but was becoming more and more enthusiastic about theatre. Broadcasting employee at DT64. The fall of the Berlin wall.

Intensive acting years at the theatre in Neustrelitz and Rostock.

With the birth of her first son, Regine moved back to her favourite city Berlin and to GRIPS Theater, where she has been playing, arguing and developing – with interruptions since 1998

Alongside this, she has various film and TV engagements, including from 2006-2008 in the RTL series “Alles was geht” (the role of Nadja Roschinski), performed a season at the Baden-Baden Theatre, teaches acting at the Film University, and coaches for auditions and castings.

Regine is currently taking part in training at the “Tanztangente Berlin"(Creating dance in art and education).

Regine is the mother of 2 sons.

Regine has been with GRIPS since 1998 – with interruptions. 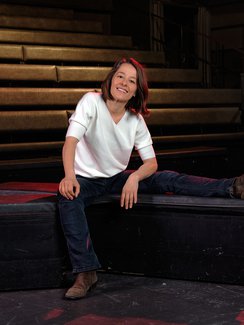