Marius Lamprecht was born in Berlin in 1990.

After graduating from secondary school, Marius Lamprecht took private acting lessons and began studying acting in 2010 at the Konrad Wolf University of Film and Television in Potsdam Babelsberg. While still a student he was on stage in “Durstige Vögel” at the Maxim Gorki Theatre in Berlin and in “Draussen vor der Tür” at the Hans Otto Theatre.

After graduating in 2014, his first permanent engagement led him to the Osnabrück Theatre. There he could be seen as Werther in “Die Leiden des jungen Werther” or as Saleem in “The Trip”. In 2015, “The Trip” won the Nachtkritik Theatre Meeting as the best production and has guest performances at the Schaubühne Berlin, the Schauspiel Frankfurt and the Darmstadt State Theatre.

From 2016 to 2018 Marius moved to the Schlosstheater Celle. Important roles are: Oskar Matzerath in “Die Blechtrommel”, William Bloor in “Foxfinder” and Figaro in “Der tolle Tag oder Figaros Hochzeit”.

He has been a permanent member of the GRIPS Theater ensemble since the 2018/19 season.

In addition to his work at the theatre, Marius also gets in front of the camera from time to time. Most recently in the ARD feature film “Gladbeck” (Director: Kilian Riedhof). 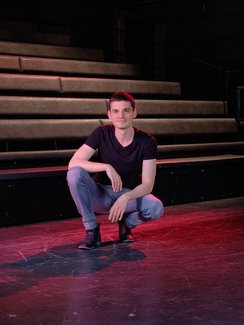