Amelie Köder was born in 1989 in Ellwangen an der Jagst and began singing in various choirs at the age of seven.

At the age of 14 she took lessons in classical singing, shortly afterwards also in jazz singing. In 2008 she founded an acoustic duo with guitarist Tobias Knecht, which still performs together today.

She completed her acting studies at the European Theatre Institute in Berlin in 2013. In 2015 she could be seen in “Angstmän” at the Rottweil Zimmer Theatre.

Amelie has been a permanent member of the GRIPS Theater ensemble since January 2016. 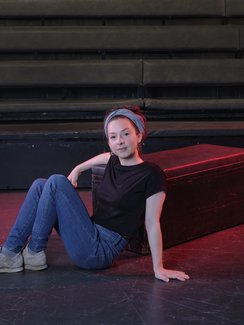